Engaged with D.C.’s global community, the Global Business Initiative aims to strengthen the nexus between international organizations and D.C. embassies and the Georgetown McDonough community. We encourage this collaboration through signature events held in our campus or at the host organization’s venue.

Explore our various outings and engagements with Embassies across D.C. through our highlighted Instagram stories.

Gil-Casares, a native of Madrid, joined the Spanish Foreign Service before being appointed Deputy Director General of Cooperatives at the Spanish Institute for Development Cooperation in 1990. Six years later, he was named director of the International Security Department in Prime Minister José María Aznar’s cabinet and later served as secretary of the Foreign Policy Council, a body formed to coordinate the activities of different ministries and agencies abroad. He was appointed Secretary of State for Foreign Affairs from 2002 to 2004 and has served as the ambassador to South Africa.

Through his political and economic journey, Gil-Casares’ talk gave greater insight to students who will embark on their own business ventures in Spain through the required Global Business Experience (GBE) capstone class. The GBE is a week-long consulting project in early March where students have the opportunity to work closely with foreign business leaders and sharpen skills learned through Georgetown’s MBA Program. Students had the option of choosing one of six cities for their projects: São Paulo, Barcelona, Madrid, Mumbai, Hong Kong, and Abu Dhabi.

Daniel Emerson, a full-time, 2nd year MBA student, chose Barcelona due to familial ties, as well the opportunity to experience the city with his classmates.

“I’m Cuban and have family who now live in Spain, so I thought this would be the perfect opportunity to go back,” he said. “It’s really great how Georgetown provides us with speakers [like the ambassador] to prepare us for the project. This was the second speaker we’ve had in a series that goes on the entire semester. Last week, four prominent Spanish businessmen provided an overview of the economy and how businesses function. It’s been a really great opportunity to learn more about the politics and broader economy in Spain.”

Gil-Casares touched on three measures that have helped restore Spain’s economy since the crash, including changes to labor market regulations, financial sector reform, and consolidation of public finances. The ambassador also answered questions from students, providing his take on the political instability of Spain’s Catalan region, as well as the looming presence of states threatening to leave the European Union.

“I thought it was really interesting to hear [the ambassador] speak on the issue of Catalan independence. That’s something that isn’t widely discussed, but I think one of the benefits of Georgetown is we take a look at not only the business perspectives, but also a lot of the regulatory implications of things going on around the world,” Emerson noted.

Yet, through all of the economic and political unrest the country has faced, the ambassador concluded with a message of hope.

“Spain has gone through a very difficult time,” he said. “Unemployment is still high, and jobs are still difficult to come by; however, in terms of policy, the progress of reforms has laid the ground for stability and growth. We need to persevere in the battle of unemployment and obtain sustainable development. People often forget about the efforts and reforms that we have made, and I want to remind you of that. When you go to Spain, think about where we were four years ago and where we are right now.” 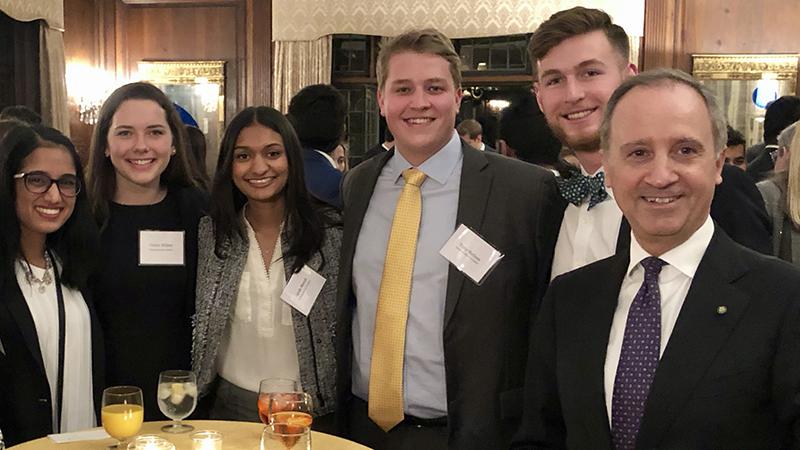 The Ambassador of Italy to the United States Armando Varricchio welcomed students and alumni to his residence as part of the school’s D.C. Embassy Series. 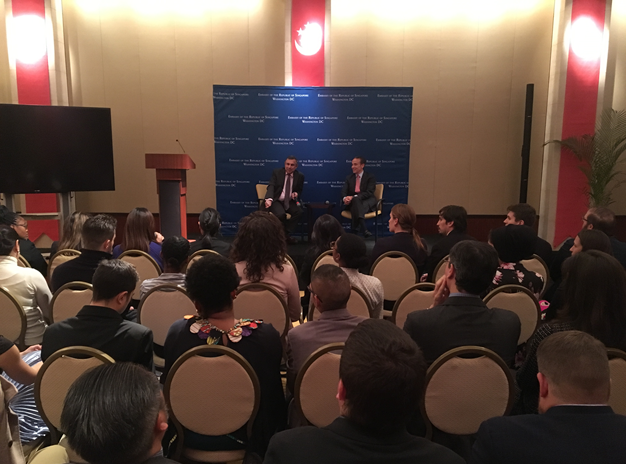