Financier and philanthropist David Rubenstein visited Georgetown’s McDonough School of Business on March 27 for a discussion ranging from changes in private equity, to career advice, to reflections on Rubenstein’s life and upbringing. Rubenstein is the co-founder and co-executive chairman of the Carlyle Group, a private equity firm. The event was part of the school’s Stanton Distinguished Leaders Series and was moderated by Dean Paul Almeida and Vice Dean Pietra Rivoli.

Rubinstein credited some of his success to challenges he faced growing up. Neither of his parents graduated from high school, and he grew up in a small row house in a segregated Jewish neighborhood of Baltimore.

“I feel blessed that my parents gave me the support that they gave me, that I didn’t have money growing up, that I had to do it on my own, and in the end I wasn’t so successful that I felt I could coast the rest of my life,” Rubenstein said.

President John Kennedy’s inaugural address, which he heard as a child in 1961, inspired him to look for ways to serve the country. He pursued a law degree and became a policy advisor to President Jimmy Carter, over the objections of his mother, who wanted him to become a dentist.

“I like to tell students this: First, don’t listen to what your parents want you to do… You have to live your own life and find what is going to make you happy,” Rubenstein said. 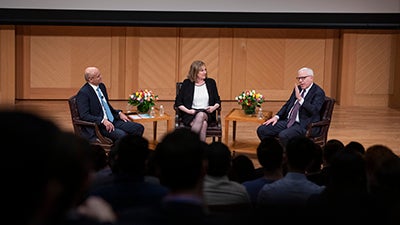 Reading two pieces of information changed the course of his life: First, he read in the news about the leveraged buyout of Gibson Greeting Cards in 1981, the first major buyout of its kind. Second, he read in a book on entrepreneurship that the chances of starting a company decline dramatically after the age of 37. So at age 37, Rubinstein co-founded the Carlyle Group in Washington, D.C., to undertake buyouts of companies with ties to the federal government.

“People who win Nobel prizes don’t do it by doing something they hate,” he said. “You have to find something you love and you have to do it more than 9 to 5 if you want to be successful in any business or any other part of life.”

Almeida and Rivoli also asked Rubenstein about problems presently facing the American economy. Rubesntein cited the size of the federal debt and deficit, increasing entitlement spending, growing income inequality, and lack of social mobility as challenges to the country, as well as the risk of Brexit abroad.

Reflecting on his career, Rubenstein said that experimenting in more than one line of work was important in finding happiness in a long-term job. “When you graduate from business school, you in effect have a license to make money,” he said. “But if money is the only thing that motivates you, you probably won’t be a happy person.”

Rubenstein closed his discussion with the importance of philanthropy, especially to institutions of education, noting that he went to school on various scholarships. He has joined other billionaires in a pledge to donate the majority of their wealth to philanthropy, and he himself plans to donate the entirety of his money.

“You can give money to many things when you get older, but probably nothing is as rewarding, psychologically at least, as giving money back to the places that enabled you to get where you are in terms of giving you an education,” he said.