Paula J. Dobriansky (F’77), former Under Secretary of State for Democracy and Global Affairs, moderated the conversation with Burns and Bank of America CEO Brian Moynihan about the filmmaker’s latest work, The Vietnam War.

Bank of America, which has funded this and many of Burns’ other films, hosted the event with Georgetown’s Global Social Enterprise Initiative (new window) and the university’s Office of the President.

“I felt that the Vietnam War was the most important event in American history after the Second World War,” said Burns, whose nearly 40-year career includes the films The Civil War, Jazz and Baseball and more than a dozen others.

“If we are concerned about our present moment … we would do no better than to study and come to terms with Vietnam,” said Burns. “I think it would arm us in the best kind of way to see what’s going on in a little bit clearer perspective and be able to understand that as much as we wring our hands about a fractured partisan moment right now, it does not compare in its intensity to the Vietnam era.”

The event included a showing of brief clips from the 18-hour film that highlighted the massive Vietnam anti-war movement as well as the private and public concerns of U.S. presidents and military leaders of the era. 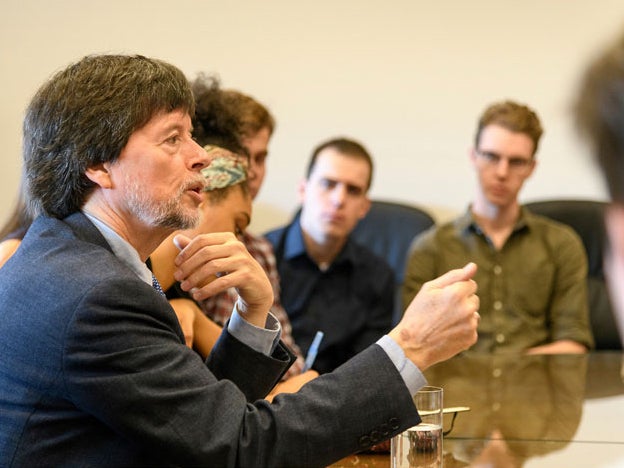 Burns also said that many of the architects of the first Gulf War, including U.S. generals Norman Schwarzkopf and Colin Powell, “were students of the failure in Vietnam and ensured in that struggle that we would not make that same mistake.”

The military elimination of the draft, greater protection of media covering wars and the creation of guided bombs “all came out of Vietnam,” he said.

Moynihan said the Bank of America chose to fund the film to support “this kind of in-depth research and dialogue.” The film took 10 years to make and includes interviews with soldiers on both sides of the conflict.

During a question-and-answer session, Cristine Pedersen (SFS’18), a former U.S. Marine Corporal and president of the Georgetown University Student Veterans Association, asked Burns how veterans and non-veterans can support one another and bridge divides.

The filmmaker said such divisions are due in part to the military class created after Vietnam in place of a draft. Not having “skin in the game” has led to a lack of understanding of military service, Burns said.

He said America needs to go beyond the simple, ‘Thank you for your service’ into a “real discussion of national service.”

The Global Social Enterprise Initiative (GSEI) at Georgetown’s McDonough School of Business is designed to prepare current and future leaders to make responsible management decisions that yield both economic and social value.

Bank of America is a founding partner of GSEI and has funded a Leadership Series Speaker Event that has brought such luminaries as Bono and Warren Buffett to campus. Mutiara Alam Addini, a GSEI student leader who will receive a master’s degree from the McCourt School of Public Policy next year, welcomed the Georgetown audience at the event.

“GSEI is committed to the idea that business can be a powerful force for good,” Addini said, noting that a fellowship this past summer led her to research in Southeast Asia.

“Even today the scars of Vietnam War are evident,” she said, “but so is the resilience of the people.”