A Matter of Principal

Creating change within a system as complex and nuanced as an urban school district can feel like turning the proverbial ocean liner. But leaders in the Washington, D.C., public school system are getting help steering toward the future courtesy of the Executive Master’s in Leadership (EML) program from Georgetown McDonough.

Architects of the program expected a modicum of friction between the two competitive groups but also predicted great rewards borne from cross-sector collaboration. They were right on both accounts.

After a brief orientation process, the two groups fell into a synchronicity unmatched by previous cohorts. The first cross-sector group has helped author legislation, presented a series of recommendations to the office of the Deputy Mayor for Education, and led to one current public school principal joining the board of directors of a charter school. In other words, change did not come from reinvention but rather from collaboration.

“We are changing the landscape of urban public school education with the EML program,” says Robert Bies, professor of management and academic director of the D.C. Public School Leaders EML. “We are changing it school by school, neighborhood by neighborhood, block by block.”

Henderson graduated from the program in 2007 and later approached the university about creating an EML specifically for D.C. Public Schools (DCPS) principals. A fiery champion of social justice with a deep well of compassion for the neighborhoods surrounding Georgetown University, where he has lived since 1990, Bies redesigned the curriculum and assembled a faculty well-versed in educational leadership. With funding and support from CityBridge Education and later the Walton Family Foundation for the cross-sector version, the program originally launched in 2013 with 25 participants from DCPS.

“We are changing the landscape of urban public school education with the EML program.”
— Robert Bies, Professor of Management and Academic Director of the D.C. Public School Leaders Executive Master’s in Leadership Program

“We are having a big impact because there are people in positions of leadership who have gone through this program,” Bies says. “And it is a very powerful thing.”

Bies monitors the usual hard metrics from D.C. schools such as attendance, test scores, and graduation rates but also scans the horizon for signs that the EML program is having an impact on the broader community. Innovations within the educational sphere and enhanced communication between D.C. principals and the City Council are difficult to measure but represent valuable progress, he says.

The cross-sector experiment, which began with the D.C. Public School Leaders EML class of 2017 and continues in 2018, has produced a number of initiatives with the potential to dramatically improve the lives of the District’s students. 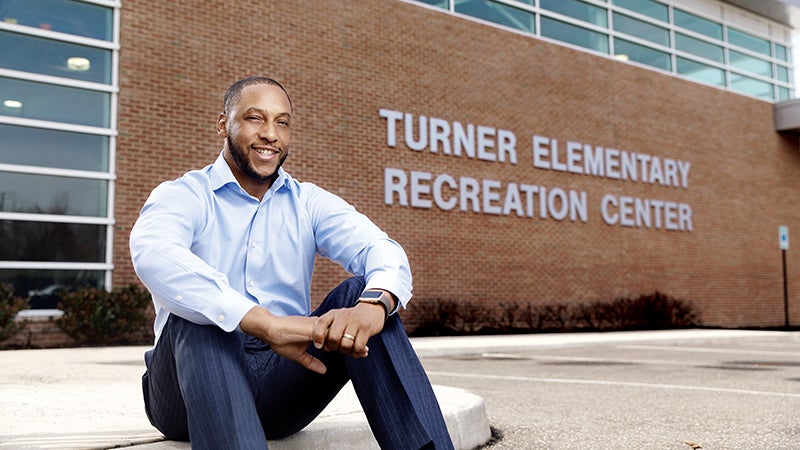 “One of the best aspects of the EML experience was the realization that there are committed, mission-driven leaders leading their charters who approach the work with the same level of care and commitment to equity that we have on the DCPS side,” says Eric Bethel (EML’17), principal of Turner Elementary School in southeast Washington, D.C., and graduate of the first cross-sector EML.

Bethel entered the EML program with a perception that charter schools were the home-team favorite in the competition to attract students and the increased funding they represent, and enjoyed certain advantages not afforded traditional public schools. It was a belief that he admits was misinformed, and one that evaporated quickly when he came to know his fellow EML students who hailed from the charter side.

“Our charter leaders had opinions about D.C. leaders as well, but it straightened itself out quickly,” says Kathryn Procope (EML’17), head of school at Howard University Middle School of Mathematics and Science, a charter school in the northwest region of Washington, D.C. “Once we sat down, we realized that we are all teaching the same children and are all facing similar challenges. We all have the same goals, and we are going to help each other work through them.”

The principals quickly acknowledged they were all struggling against the same obstacles to education, too.

The classmates identified four separate issues and articulated them into a multipart initiative that was then presented to the deputy mayor for education. They include attendance, school mobility (students abruptly changing schools), safe passage to and from schools, and elevating immigration integration. The response was enthusiastic. The implementation of these suggestions, which can be seen on the home page of the office of the deputy mayor for education, has proceeded rapidly.

“Our charter leaders had opinions about D.C. leaders as well, but it straightened itself out quickly. Once we sat down, we realized that we are all teaching the same children and are all facing similar challenges.”
— Kathryn Procope (EML’17) Head of School at Howard University Middle School of Mathematics and Science

“The EML really helped us organize our thoughts,” says Bethel, who contributed to correcting the current attendance crisis. “More importantly, it gave us poise. Because we are on the ground and know exactly what is happening, it created a vehicle for dialogue with folks who make policy but who are far from the ground. We shared some of the nuances on why kids are missing school as much as they are. We had a couple technical fixes and long-term fixes, but it was the dialogue that made us feel good and that we hope was helpful for the deputy mayor’s office.”

One hurdle to childhood education was heartbreakingly common between both public school and charter school principals: the disruptive effect of trauma to children. Turner Elementary has approximately 500 students, 88 percent of whom receive some form of government assistance. Last year, according to Bethel, 46 students were responsible for more than 75 percent of classroom behavior referrals. When students are faced with the uncertainty of where they will sleep at night or how they will find dinner, symptoms of the deep poverty inherent at Bethel’s school, lashing out at the smallest perceived slight often is their first instinct.

“Trauma comes in a lot of different forms,” says Procope. “There is homelessness. There are various types of abuse in the home: physical, verbal, or substance. There are so many different things that young people are experiencing. Then they come to school with it, and we have to figure out, ‘How do I educate this baby?’”

The cross-sector cohort came up with the trauma-informed educator certification, a program to give teachers the necessary skills to deal more effectively with students who have experienced trauma and stress outside of school, and thus lessen their disruption in the classroom and avoid student suspension. D.C. Councilmember David Grosso introduced the certification in his bill, the Student Fair Access to School Act, last November, as a way to curb exclusionary discipline measures.

“The trauma-informed educator certification happened organically,” says Bies. “This was not a class requirement. The idea came out of people sitting in a classroom who said, ‘We’ve got these issues. What can we do about them?’ And that is the sense of empowerment this program creates. ‘We can do it. We should do it. We will do it. And we don’t need to have our professor tell us that we can do it.’ That is the energy that is so exciting to me — when people really want to change the world.” 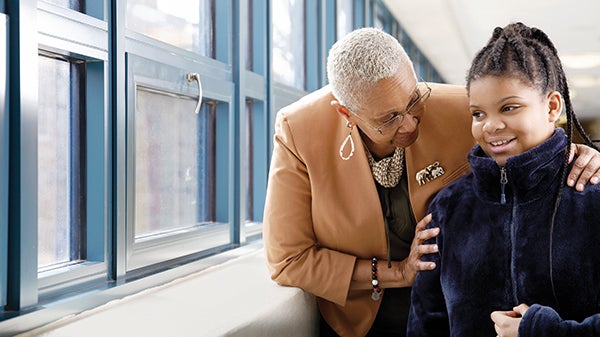 Bies says that nearly 100 school leaders have completed the D.C. Public School Leaders EML program and its predecessor over the last five years. That’s almost half of the total number of public and charter schools in the city, giving the EML graduates outsized influence on the 90,000 students enrolled.

“One of the things I say is, ‘Leaders are signal senders.’ If you are picking up these signals from your principals, all of the sudden it is a little bit different. It trickles down to teachers, staff, and students,” says Bies.

“One of the best aspects of the EML experience was the realization that there are committed mission-driven leaders leading their charters, who approach the work with the same level of care and commitment to equity that we have on the D.C. public school side.”
— Eric Bethel (EML’17), Principal of Turner Elementary School

EML graduates tend to be ambassadors for the knowledge they gain during the yearlong program. Procope shares her textbooks with her team during weekly leadership huddles and has even found her husband reading through them to improve performance in his own business, a big data consulting firm that works with Amazon. Bethel shows PowerPoint presentations created by Georgetown professors to his assistant principals in an effort to grow their leadership capacity.

Mary Ann Stinson (EML’13), principal of Truesdell Education Campus, was a member of the very first DCPS EML cohort. Lessons she learned from Bies — the difference between an adaptive problem and a technical problem, for instance — have become daily companions for her staff.

“As a team, we use that common language to discuss problem solving,” says Stinson. “I have three assistant principals, and when we are together, we have a strong academic leadership team. That common language has definitely trickled down, and we use it on a daily basis.”

The professional life of the graduates seems to benefit from the innovation and collaborative spirit spurred by Bies and faculty. Tenia Pritchard (EML’17), a former Washington, D.C., public school student and now principal of Whittier Elementary School, recently was named Principal of the Year at the annual Standing Ovation for D.C. Public Schools gala put on by the D.C. Public Education Fund. At the awards ceremony, Stinson’s school received an Academic Leadership Award, and Stinson was honored with her second Rubenstein Award since receiving her EML degree. However, the impact on the personal life of the principals might be even greater.

“Nobody realizes how lonely the school leader position is,” says Procope, who, along with the rest of her cohort, attended the awards ceremony for EML classmate Pritchard. “On the charter side, we don’t have cluster meetings and the types of things the DCPS principals have that give them opportunities to get together. That was one of the really important things about EML for me. It gave us an opportunity to talk about some of the issues that we face, to vent, and to get support. So, I am really grateful to the EML program because now I have that opportunity.”

The 2017 cohort remains remarkably close and has scheduled monthly meetings for the rest of 2018. Their text message chain comes to life at least a dozen times a day, says Bethel, ranging from queries about curricula to offers to meet up socially for some decompression.

“To be a school principal can be a very isolating job,” says Bies. “To know that there is somebody out there you can reach out to for advice, counsel, and support is really important to sustaining people.”

Bies is sustained by his work with the EML program, tinkering with the curriculum and interviewing potential candidates. With a thirst for social justice and a desire to empower students, he has found the perfect spot in his own professional Venn diagram. He describes it as playing at the crossroads of idealism and action.

“I’m an idealist. I want to change the world. I want to make it a better world,” he says. “I get to work with people who are actually doing that. When I see people achieve their greatness, I tell them ‘Keep doing what you do. It matters. You matter.’ That’s my philosophy.”