At a happy hour with his wife, Megan, Jim Luetkemeyer (MBA’08) was contemplating his next career move. He was feeling stagnant in his public relations position and wondered what he should aim for next.

But then he asked Megan, “Why don’t we travel around the world?”

That out-of-nowhere question led to a temporary early retirement. They quit their jobs — Megan was a genetic counselor at MedStar Georgetown University Hospital — rented out their condo, sold their car, and took off to see the world in August 2016. They returned to Washington, D.C., one year later after exploring 33 countries and more than 120 cities and towns on six continents. (Scroll down for the itinerary.) 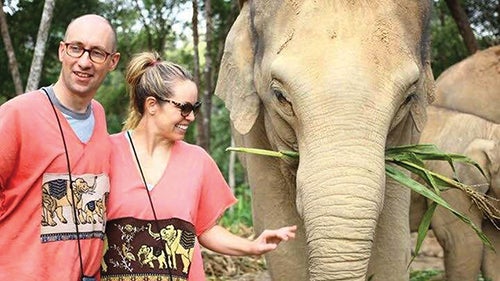 Jim: I brought up traveling around the world a little bit on a lark. I assumed my wife would say, “That’s crazy; we’re obviously not going to do something like that,” but instead she said, “Well, how would that work?” It began a two-month conversation where we started to think about how this would work. What would the process be? What would it mean for our lives?

There was another precipitating event before that conversation. I had lost a close friend of mine who was in his early 30s. He died very suddenly of a heart attack. When something like that happens, you wonder about what’s next in life, how you can take things for granted, and how nothing is guaranteed in this life. Also, Megan lost her father to cancer a couple of years before we left.

Megan: He was diagnosed with cancer and then three weeks later passed away. He had worked so hard, talked about wanting to retire and all the things he was going to do. So, that always stuck with me.

Jim: Traveling around the world wasn’t something I had anticipated or expected I would ever do. We had traveled two weeks for our honeymoon, which had been the longest amount of time I had ever been away. We went to Thailand and had a wonderful time. I started to realize how great and how educational travel can be.

If people can borrow money from their retirement, we wanted to borrow time, and we borrowed one year. The most obvious and biggest challenge was financing the trip. We had been saving for what we thought would be a down payment on a house. We used part of that money for the trip.

“If people can borrow money from their retirement, we wanted to borrow time, and we borrowed one year.”
— Jim Luetkemeyer (MBA’08)

Megan: We each had a list of places that we wanted to go. We combined our lists, then individually ranked places. That set the outline, and then we filled it in with one-way flights. We also took jet lag into account. Jim did some research and figured out going westward versus eastward would be better for us.

I wanted to go to the Galapagos Islands, and it definitely lived up to what I thought it would. It was one of our first stops. I remember us both saying, “How can this get better?”

Megan: In the Galapagos and on the Machu Picchu trip, we met some people from different countries, so when we were in their country we connected with them. One of our friends met us in Frankfurt, Germany, and took us around. We met friends from Munich who invited us over for dinner. We also met a couple in South Africa who were from Scotland. When we were in Scotland, they showed us around and took Jim golfing. It was fun to reconnect with people we had met earlier on our trip. 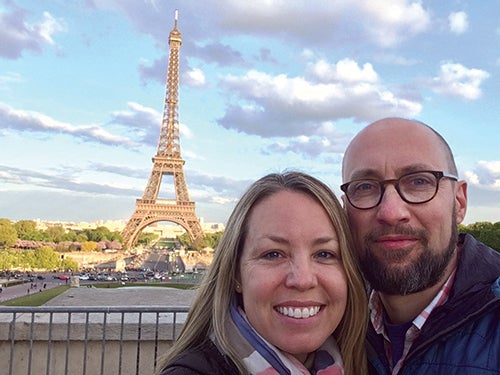 Jim: We met people during our trip who showed us acts of kindness, who pointed us in the right direction the many times that we needed it. That really stuck with us: how kind and generous people can be all over the world.

Megan: Traveling is a stressful experience. Essentially, we were each other’s only social outlet for a year. The travel brought us closer a lot faster because we were spending so much time together and helping each other through decisions, whether that be trying to figure out the right place to stay, where to go, or looking at the directions. It improved our ability to communicate with each other.

Jim: I learned that my wife has a great deal more patience than me. She’s more organized than I am in some aspects and has a better memory. I’m still asking, “Where were we when we went to that restaurant and had that certain food?”

Even before we left, we picked up, to a certain degree, that sense of comfort with what the future will hold. There’s nothing like quitting your job to give you a bigger sense that everything is going to work out and another job will come along.

Megan: Thinking back to a year ago when we were deciding on this, we were both so nervous about quitting midcareer and how everything was going to work out. It was 100 percent worth it, all of our experiences. We’re going to have these memories forever.

The Luetkemeyers’ trip took them around the world.